A Word on Wednesday: Suffer

Using the verb suffer with an object is one of my word choice pet peeves. The culprit is the acceptable definition  No. 5: “to undergo, be subjected to, or endure (pain, distress, injury, or anything unpleasantness).Consider when the object of the sentence is an illness:
She suffers from diabetes.
He suffers from cancer.
I suffer from bipolar disorder.
Now consider the same idea told with a different action verb. The subject of the sentence sounds stronger in every instance.
She manages her diabetes.
He lives with cancer.
I treat my bipolar disorder.

I blame well-meaning writing coaches for campaigning against the use of passive language. We are taught the following statements are weak.

She has diabetes.
He has cancer.
I have bipolar disorder.

So rather than clearly and objectively stating a condition, writers are supposed to replace the passive “has” with an active verb. Suffer, then, does the trick; it is dramatic.  The word itself is pronounced with a softness, a weakness, a helplessness: [suhf-er]. It does not sound tough.

When one defines her reality as suffering, it reinforces a victim mentality. Perhaps a person faces disease, compensates for disability, accepts illness, embraces challenge. Perhaps the pain associated with the disease is manageable. 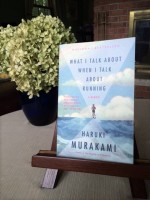 Recently, I read “What I Talk About When I Talk About Running,” by Haruki Murakami and the following line gave me pause. I tossed it back and forth in my mind.

“Pain is inevitable; suffering is optional.”

I find Murakami’s observation logical and true. I also find it comforting. It encourages one to accept the pain and face it.

When we talk about having an illness “suffering is optional.”

The word I would use instead of suffer is one of graceful strength.

One can endure the pain, weather the storm, and carry on.

2 Comments on “A Word on Wednesday: Suffer”